Although the majority of catchers throw right handed, there are still a significant number of left handed catchers that are passionate about the position.

This post explores the marketplace for left handed catchers mitts and identifies the top picks for adult and youth catchers playing both Baseball and Fastpitch Softball. Left handed throwing (also referred to as LHT) catchers are a rarity at elite levels of Baseball and Fastpitch Softball.

Across Baseball history there have been just a few lefty backstops at the major league level.

The best left handed catcher of all time was arguably Jack Clements, a 19th century catcher that played professionally for 17 years. He caught for over 9,000 innings, collected 1,231 career hits, maintained a .287 batting average and a 26.8 bWAR.

The lefty catcher to play in the major leagues most recently was Benny Distefano of the Pittsburgh Pirates, who caught three games for the Pirates back in 1989. 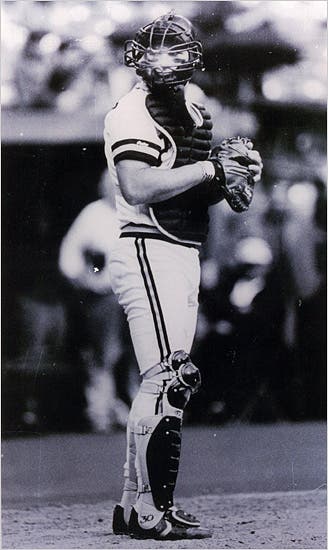 Benny Distefano, a left hander, catching for the Pittsburgh Pirates in 1989.

The main question people have is why… Why are there hardly any left handed catchers at elite levels of the game?

The answer is not black and white. In general, there are (at least) two reasons why there are few LHT catchers at advanced levels. We previously addressed this question in our FAQ post, so we are sharing those reasons here:

“The first is that left handed catchers are generally not able to field bunts down the third base line and throw as quickly and efficiently as those that throw right handed.

The second, and arguably most important, has to do with plays at the plate.

Very accurate relay throws to home caught by a left hander would have to be caught backhanded. While throws coming in from the first base line would leave the throwing side of the body completely open to the player running to the plate.”

At advanced levels of the game, every little advantage counts. Therefore, it has become a rule of thumb for coaches to typically use catchers that are right-handed.

Still, that doesn’t mean it’s impossible for talented left handed catchers to rise through the ranks and play at competitive levels. There are numerous examples of LHT catchers doing just that, such as this left handed catcher playing D1 Softball, and another currently playing for the University of Rochester’s Baseball team.

In short, if you or your child is a left handed catcher and you or they are passionate about catching, then by all means continue playing the position!

Since LHT catchers are rare at advanced levels, catcher’s mitts made for adult level LHT Baseball and Fastpitch Softball catchers are not very common.

If you do a search for left handed catchers mitts, you are likely to find a number available for youth catchers. Yet, hardly any for catchers above the youth level.

This doesn’t mean they’re non-existent, though.

In fact, there are a few very good catcher’s mitts for left handers playing at advanced levels of Baseball and Fastpitch Softball.

To help parents and players interested in picking up a LHT catcher’s mitt, we embarked on a search to see what was available.

After finishing our research, we identified a number of quality catcher’s mitts to share with our readers.

Our top picks of left handed catchers mitts are as follows:

Continue scrolling to learn more about each pick! The shell of the mitt is built using "tobacco tanned" steer hide leather. It is an open back and closed web mitt, it comes with a leather wrist protector, and each is individually laced and stitched by hand in North America.

In addition to the care that each catcher's mitt receives when it's being put together, a major selling point is that Shoeless Joe catcher's mitts are almost entirely broken in out of the box. This means that as soon as you get the mitt, you should be able to use it right away.

We also like the vintage look and feel that these catcher's mitts have. Though it has a bit of that "worn" look to it, rest assured that these mitts were made with high-quality, durable materials and should last a while.

Shoeless Joe makes two sizes of its Professional Series catcher's mitt: a 32 inch model and a 34 inch model. We recommend the 34 inch model for most adult Baseball catchers.

Made with high-quality steerhide leather

Comes nearly 100% broken in out of the box

Has that old-timey, vintage look

Durable - it should last a very long time

The available stock of left-handed mitts can be limited The Rawlings Renegade is our top pick for youth catchers who are left handed. It measures 32.5 inches. (Note: The picture above shows the right hand version of the mitt).

The pocket on the Renegade has been shaped and it's noticeably deep and flexible.

It has added palm padding and the leather has been pre-softened, which makes break in a simpler and quicker job.

This mitt has a classic black leather build, and Rawlings' red logo pops against the black giving the Renegade an attractive look.

Lastly, this mitt is incredibly affordable - a very appealing consideration since it's a quality youth catcher's mitt.

Made with real leather

Some users have reported issues with longer term durability

Additional Image of the Rawlings Renegade Our top catcher’s mitt pick for left handed Fastpitch Softball catchers is the Akadema AEA65. (Note: The above picture shows the right hand version of the mitt).

This 34 inch mitt is primarily made with US steerhide leather. It also has a special lightweight leather on the back of the mitt which has the effect of giving it a much lighter feel overall.

We like its look, with the tan and brown leather blend and the white A logo for Akadema.

Another aspect to consider is that this mitt has some break-in out of the box, which should speed up the time to get it fully game ready.

The Akadema AEA65 catcher’s mitt is an H-web, like most Fastpitch varieties. The finger stalls are designed to fit a female hand, and it’s a great choice for those playing at more advanced levels of the game.

Durable; should keep its shape for many seasons

Has some break-in out of the box

Though it has some break-in, it will still require some effort to get it fully game ready The Xeno is a closed back, H web Fastpitch mitt an opening and a hood for the index finger. It measures 33 inches and has a leather shell with a nice brown and white design.

Louisville Slugger's Xeno mitt has an adjustable, velcro-based wrist strap that allows you to make the mitt looser, or more snug, based on preference.

Lastly, this catcher's mitt has a good fit as it was designed specifically for a female's hand.

Padding is adequate, but not exceptional. Keep this in mind if you’re planning to catch faster pitching. Question: What should I do if I want more padding in my left handed catchers mitt to help prevent palm pain?

Answer: New catcher's mitts typically have sufficient leather padding built into them, especially if you buy a more "premium" mitt.

Still, over time, repeated use can slowly wear down the padding and lead to palm or finger pain in your catching hand.

One of the simplest and most cost effective solutions in this scenario is to get a padded inner glove.

They're super affordable, have a good amount of palm padding and they fit easily inside gloves. Check out our article on them for much more detail.

Question: Who are all of the left-handed catchers to play at least one game in the MLB?

Answer: Across the history of the major leagues, there have been approximately 30 left handed catchers that have appeared in at least one big league game behind the plate.

Those catchers are listed below, in alphabetical order by first name.

Thank you for taking the time to read this article - especially if you made it this far! We hope that you found this post to be informative and helpful.

If we can answer any questions, please feel free to contact us.