As one of Baseball’s newest teams, the Tampa Bay Rays have already had a good deal of success in their team’s short history. Contributing to this success has been numerous Rays catchers over the years.

This article highlights the best catchers to ever put on a Rays jersey as determined by each player's career and single season wins above replacement (or, WAR). 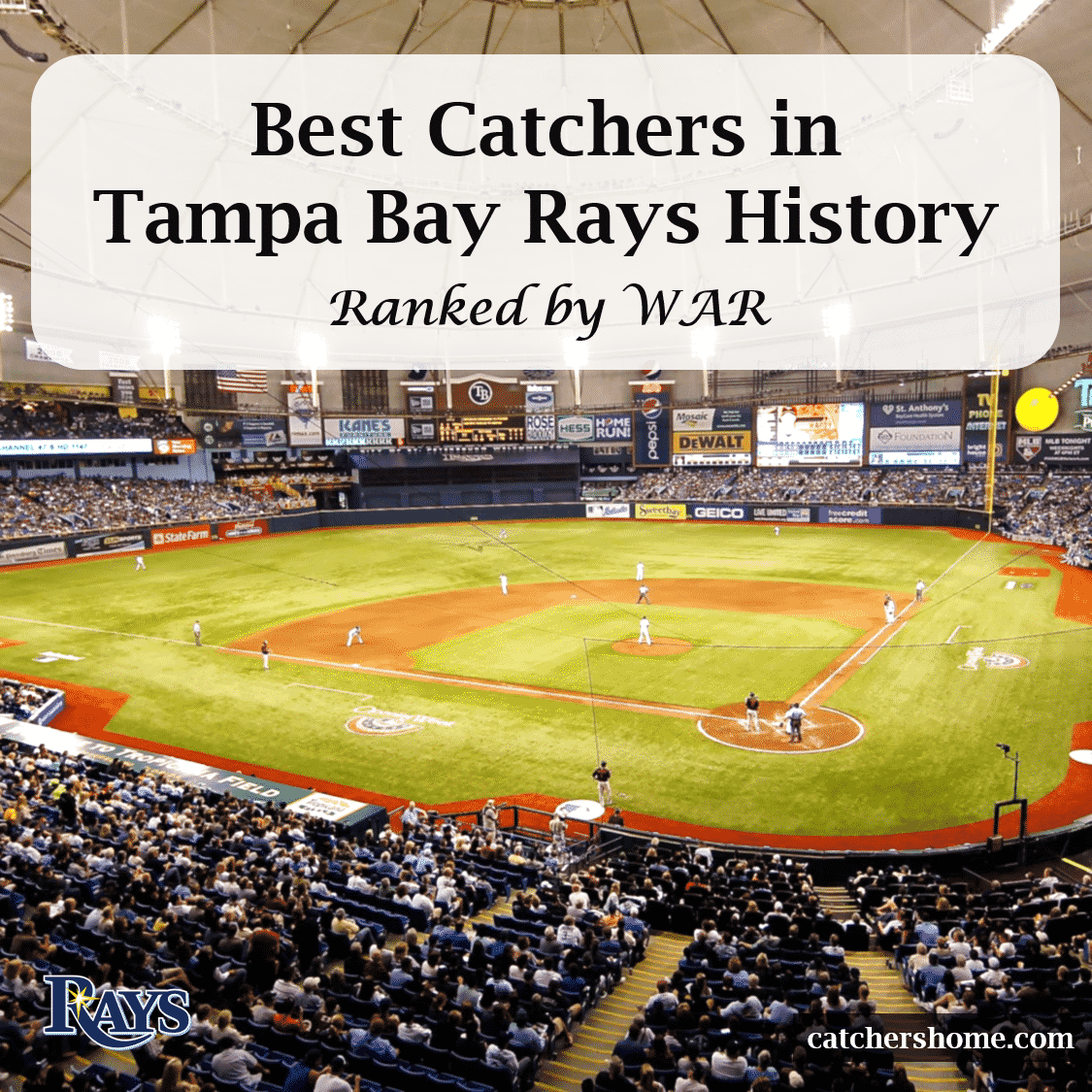 The Best Tampa Bay Rays Catchers of All Time

A Brief History of the Tampa Bay Rays

A New Team in Town

The Tampa Bay Rays are one of Major League Baseball’s (MLBs) newest teams. Together with the Arizona Diamondbacks, the Rays got their start in 1998 thanks to Baseball’s most recent expansion.

Originally called the Devil Rays, their inaugural season in ‘98 was not spectacular, as they finished last in the AL East. This was not entirely surprising though, considering the dismal first season records of practically all expansion teams in the modern era. Interestingly, the Devil Rays welcomed more than 2.5 million fans to Tropicana Field in 1998, which remains a franchise attendance record to this day.

The Devil Rays struggled during their first ten years of existence. Between 1998 - 2007, Tampa Bay never finished .500 or above, and only had one season where they were not last in the AL East (2004).

The 2008 season ushered in a new name for the team. No longer would they be known as the Devil Rays - they were now just the Rays. They also got rid of the old colors and adopted the color scheme that the Rays use today.

The re-branding effort must have worked because the Rays had an incredible season in 2008. They not only had their first .500 plus season (97 - 65) in team history, but they also won the AL pennant and appeared in the World Series against the Philadelphia Phillies! The St. Petersburg Times' newspaper after the Rays clinched the 2008 AL pennant.

Though the Rays did not win the ‘08 Series, their successful season sparked a period of five straight years (2009 - 2013) of above .500 Baseball with three playoff appearances in that span.

Then, in 2014, the Rays had a challenging season, finishing 77 - 85. After the season the Rays’ manager Joe Maddon opted to leave the team, and Kevin Cash took over managerial duties beginning in 2015.

During the pandemic-shortened season in 2020, the Rays had another incredible run. Just like 2008, the Rays won the pennant and made it to the World Series, though they lost in six games to the Dodgers. The Tampa Bay Rays celebrating after securing a spot in the 2020 World Series.

The future looks bright for the Rays, and they have gotten off to a hot start during the 2021 season (as of the date of publication).

Referred to as WAR, Wins Above Replacement is a Baseball metric which was developed to measure an individual player’s overall contributions to his team.

There is a different WAR formula used for pitchers and for position players, and the calculation for WAR can vary by publishing outlet (such as Baseball-Reference and Fangraphs).

Still, it’s an incredibly useful and popular measure, since it does such a great job at capturing the comprehensive value that a player provides.

For this article, I researched all catchers that played for the Rays and ranked them by career and single season WAR, utilizing Baseball Reference as the source. So, I scanned player data going back to 1998 - the first season in Rays history.

Please note: The player must have at least 100 games played as a member of the Tampa Bay Rays to be eligible for the career WAR list. The only active player to appear on this list (whose WAR is subject to change), Wilson Ramos has been in the big leagues for 12 seasons and made two all star teams thus far. He is currently a member of the Detroit Tigers.

The Venezuelan native made his MLB debut back in 2010 with the Twins before spending a number of seasons with the Washington Nationals. Ramos was a member of the Rays during 2017 and part of 2018, playing in a total of 142 games for Tampa Bay. John Jaso spent the majority of his career as a catcher, though he made a substantial number of appearances (particularly later in his career) as a designated hitter, first baseman and an outfielder.

Jaso was drafted by the Devil Rays in 2003 and made his debut during the Rays’ famed 2008 season. While he spent 2009 in the minors, Jaso made it back to the bigs in 2010. That season and in 2011, he served in a platoon role behind the plate with Kelly Shoppach.

Jaso was traded after 2011 but came back to the Rays for the 2015 season (note: he did not catch in any games that season). Alongside John Jaso during Tampa Bay’s 2010 and 2011 seasons was Kelly Shoppach. The nine year MLB veteran spent time with five big league teams during his career, his best years occurring while a member of the Cleveland Indians.

Please note: The player must have at least 60 games played in one season as a member of the Rays to be eligible for the single-season WAR list. The catcher with the best single season in Tampa Bay Rays history is Toby Hall, with a 2.8 WAR in 2005.

His solid season was due in large part to his outstanding defense. Hall led the entire AL - across all positions - in defensive WAR (dWAR) in 2005 with 2.7. In 1,061 innings behind the plate in '05, Hall had 759 putouts with a .989 fielding percentage and a caught stealing percentage of 42%. John Jaso prior to a 2010 game at Comerica Park in Detroit.

Although John Jaso made his MLB debut in 2008, his true rookie season came in 2010. He had a productive season, appearing in approximately 109 games in 2010 for the Rays and finishing in the top five for AL Rookie of the Year. Former catcher Dioner Navarro in a September 2008 game against the New York Yankees.

Navarro was the Rays' starting catcher in all five games of the 2008 World Series. He had a good offensive Series, going 6 for 18 (.353) with a walk and two runs.

Hopefully you found this article to be a helpful and interesting read. I learned a lot about the Rays and these players in the process of researching and writing.

If you want to get in touch about this article, please head over to the Contact Us page or send me an email to scott (at) catchersome (dot) com. I always enjoy hearing from readers.