The Philadelphia Phillies got their start way back in 1883. The team has had a fascinating history since that time, and some phenomenal catchers have worn Phillies jerseys over the years.

This post surveys the best Philadelphia Phillies catchers in team history based on both career and single-season Wins Above Replacement (WAR). The Phillies franchise got its start in 1883. They were first known as the Quakers and shortly after became known as the Phillies, which was short for Philadelphians.

The team did not have much success on paper for the first few decades of their existence.

Their primary star in the Phillies' early history was pitcher Grover Cleveland Alexander, who was a force to be reckoned with on the mound. In just his rookie season, in 1911, Alexander had 28 wins and 227 strikeouts. Grover Cleveland Alexander warming up while with the Phillies.

In 1915, the Phillies made their first appearance in the World Series, losing to the Boston Red Sox in five games.

Shortly thereafter, the Phillies began a 30 year period where they annually finished at or near the bottom of the National League (NL) about 80 percent of the time during that span.

The Whiz Kids Through the 1980 Championship

After World War II, the Phillies got a number of young, talented players.

In 1950, the team known as the Whiz Kids made it to the World Series thanks to guys like Richie Ashburn, Curt Simmons and Robin Roberts. Unfortunately for the Phils, they faced Joe DiMaggio's Yankees dynasty in the Series and lost in four straight. The Phillies didn't get close to the playoffs the rest of the decade, and in the 60s they only made one serious push at the NL pennant, in 1964.

In the 70s, the Phillies had a number of really successful teams. They won the NL pennant three consecutive years between 1976 - 1978, and in 1980 they won their first World Series in franchise history.

The Phillies continued playing above .500 baseball throughout the early 80s, even making it back to the World Series in 1983 (losing to Cal Ripken Jr's Orioles).

After '83, the Phillies didn't make it back to first place again until 1993. The Phillies had an excellent team that season under the guidance of manager Jim Fregosi.

Although they made it back to the Series in '93, the Phils ran into the defending champs - the Toronto Blue Jays - and fell victim to one of the most famous World Series walk-off home runs in baseball history.

While 1993 was the high-water mark for the Phillies of the 90s, the following decade was consistently successful for the club.

In 2008, the Phillies made it back to the World Series and dominated the Tampa Bay Rays, for Philadelphia’s second championship of all-time. The next year, the Phillies made it back to the Series. This time, however, they lost to the New York Yankees.

Two years after the 2009 World Series, the Phillies won a franchise-record 102 regular season games. That season (2011) was the last time the Phils finished first in the NL East. Between 2012 and 2020, they never finished higher than third place in the division.

In 2021, the Phillies were in contention for much of the season, ultimately finishing second in the NL East behind the eventual World Series champion Atlanta Braves.

As of the date of publication, the Phillies are loaded with talent. They have the reigning 2021 NL MVP in Bryce Harper, the NL’s 2021 strikeout leader in Zack Wheeler, and slugger Rhys Hoskins, among others. Some Quick Facts About the Phillies

The Philadelphia Phillies have won two World Series championships in franchise history. The first was won in 1980 and the second came in 2008.

Below are a few facts about each of these Series victories. It's very difficult to narrow down just five all-time greats on a team that has such a long history as the Phillies.

When we looked across the landscape of baseball history and thought of all-time greats that played for the Philadelphia Phillies, the following five players came to mind.

The Phillies have had their fair share of legendary players over the years. We thought it would be interesting for readers to see a summary of Phillies ballplayers to win baseball’s three key awards - Cy Young, MVP and Rookie of the Year.

See below for details on award winners: Wins Above Replacement, or WAR, is a baseball metric that was created to quantify an MLB player’s overall contribution to his team.

If you're interested in learning more about WAR, we'd suggest reading this.

We think WAR is a great way to measure player value. For this article, we researched every catcher since 1883 that played for the Philadelphia Phillies and ranked them by their career and single-season WAR (using the Fangraphs calculation, or fWAR).

Please note: The player must have no less than 100 games played with the Phillies to be eligible for this career WAR list. Lance Parrish spent a large portion of his baseball career with the Detroit Tigers. It was the team where he first came to fame and where he won a World Series championship, in 1984.

Parrish spent a total of 19 years in the big leagues, two of which were with the Philadelphia Phillies (1987 - 1988). The eight-time all star earned three gold gloves and six silver sluggers during his career, establishing himself as one of the premier catchers of the decade.

Over the course of his career, Parrish hit 324 home runs and owned a .252/.313/440 slash line. He had a fielding percentage of .991 when playing behind the dish as a catcher and threw out 655 runners trying to steal, good for a 39% caught stealing percentage (CS%). Parrish led league catchers multiple times in categories like caught stealing, assists and double plays turned. Smoky Burgess while with the Phils.

Forrest "Smoky" Burgess had a reputation as a ballplayer that could hit anyone, anywhere. The North Carolina native broke into the big leagues with the Chicago Cubs in 1949. In the 1951 off-season, he was traded to Philadelphia.

Burgess was a Phillies fixture for parts of four seasons (1952 - 1955), before moving on to the Cincinnati Reds, Pittsburgh Pirates and then the Chicago White Sox.

Later in his career, Burgess became a go-to pinch hitter and even set a (since broken) MLB record for most lifetime pinch hits. Bob Boone while at spring training for the Phillies.

Drafted by the Phillies out of Stanford University in 1969, Bob Boone made his big league debut three years later and went on to play in parts of ten straight seasons for the Phillies (before moving to the California Angels).

Boone's career batting average was .254. He collected 1,838 hits during his career, including approximately 105 home runs and 826 RBIs.

Defensively, he caught 2,225 big league games. Over that time, Boone owned a career fielding percentage of .986 as a catcher, and he gunned down 40% of all runners attempting to steal.

Please note: The player must have a minimum of 60 games played as a Phillies catcher in one season to be eligible for the single-season WAR list. 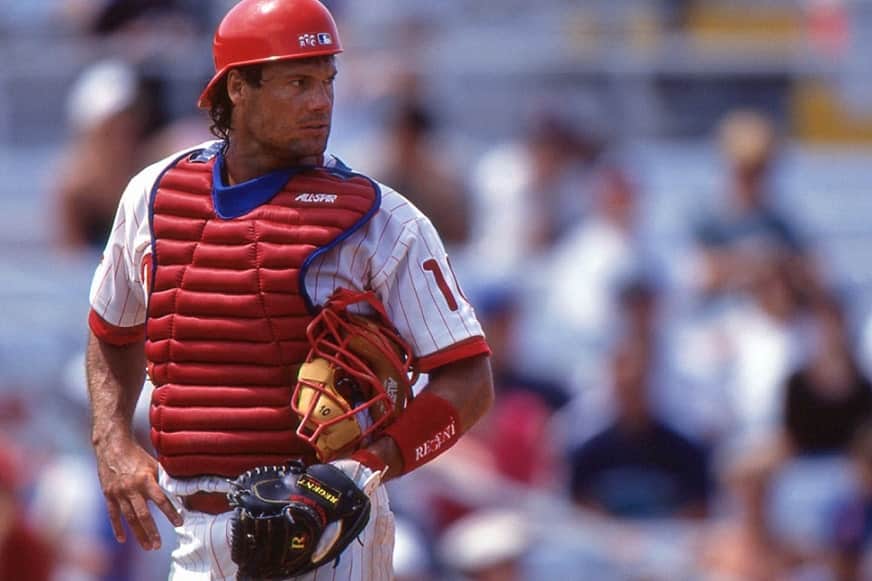 In 1,200 innings caught in 1992, Daulton maintained a .987 fielding percentage and threw out 36% of runners attempting to steal. The 49 runners caught stealing by Daulton that year led all league catchers.

In recognition of his great season in '92, Daulton was named to the all-star team, captured the silver slugger, and finished sixth in NL MVP voting. Arguably the best season of J.T. Realmuto's career so far came in 2019, which was his first season in a Phillies uniform.

Realmuto led all NL catchers in 2019 in caught stealing (43), CS% (46%), and double plays turned (14). He had a .992 fielding percentage behind the dish, and earned a gold glove award. Additionally, he claimed the silver slugger award, was named to the all-star team, and finished in the top 15 for NL MVP voting that season. Darren Daulton and Curt Schilling during the 1993 World Series.

Dutch was a leader on the 1993 Phillies team that won the NL pennant. His production that year was high, and it was nearly as impressive as his 1992 campaign.

Daulton was the NL's starting catcher in the 1993 all-star game and he finished the season seventh in league MVP voting.

List of All Philadelphia Phillies Catchers With a 2.0+ WAR Season

Having a season with a WAR that is 2.0 or better typically indicates that a player had a productive year.

A very large number of Philadelphia Phillies catchers have exceeded (or met) this mark since 1883, when the team first started playing in the big leagues.

Check out the below table which details every Phillies catcher that has had a 2.0 fWAR or better season.

Phillies Catchers over the Last 10 Years

Complete List of All Phillies Catchers Over the Last 10 Years

The below list shows every Philadelphia Phillies catcher who played in at least one defensive game as a catcher for the team since 2012.

Hopefully you found this article to be helpful. Personally, I learned a lot just from the time I spent researching and writing it.

If you would like to get in touch, please go to the Contact Us page or simply send me an email to scott (at) catchersome (dot) com. I’m always happy to hear from readers.

Sources for this Article: